Comparing market shares between this week and last week, it seems there are only 8 people whose market shares increased this week, everyone else had reductions, with many of the reductions being quite significant. What would cause this?

Each dot on the graph below represents a different person’s entry, with the ranking for week 9 along the x axis and the change in market share between week 8 and week 9 along the y axis. The points in red are new entrants who made their first submission in week 9, who are assumed to have had 0% market share in week 8. 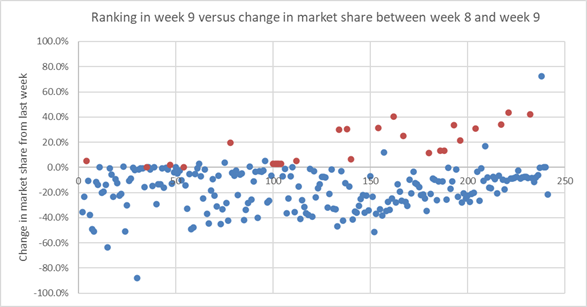 Hi @Calico, is it possible to know where you found this graph ?

@Baracuda I copied the market share data shown on the week 8 and week 9 leaderboards and made a graph from it. I was trying to get some insight into how changes in market share and profitability are linked, but the extreme movements in market share make that difficult.

hmm, yes indeed, it is difficult to draw a conclusion from others competitors info unless the model submitted is fix from one week to another