I have given the agent a sequence of move action, but it never appear on the map

UGO4GFFU2Z{H_25S(IK0EMC989×494 4.78 KB
Here I gave this agent a sequence of actions, but it never appear on the map. And during this period, its initial position is free(no other agent in it).

I think even the actions are wrong, at least, it should appear on the map…
I don’t know why…

By the way, I set all speeds 1.0 and didn’t induct malfunction.

It is entirely possible that the train is in a WAITING state (i.e. the train isn’t allowed to move until the earliest_departure time upon which the state changes to READY_TO_DEPART and then appears on the map upon giving a valid action then.
Any actions given during the WAITING state are ignored.

Thanks for you answering.

But I have checked the states of agents and found that when I give it move action its state is READY_TO_DEPART.

Here is picture showing an example of the problem I meet. 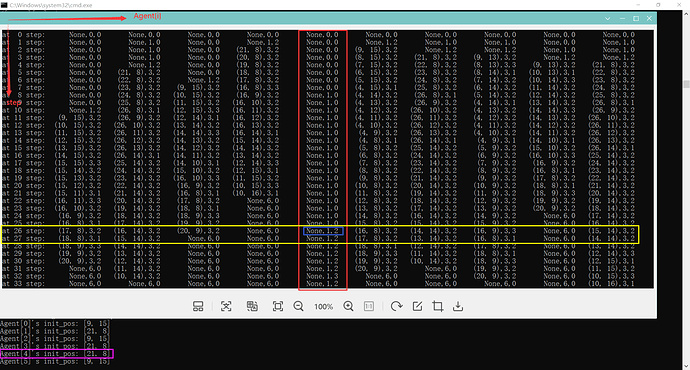 I print the triple of [position, state, action] of every agent at every step.
From the purple frame, we know that the initial_position of agent[4] is [21,8].
The red frame is the triples of agent[4].
The blue frame shows the first time I give it a MOVE_FORWARD(2) action and at this step its state is READY_TO_DEPART(1).
And the yellow frame shows that there is no other agent conflict with agent[4] since its initial_position is [21,8].

This strange phenomenon does not happen every time, and I really can’t find the reason…

I am not sure whether you can receive the notice of reply.
So I want to @you here Mr. @nimishsantosh

It seems that the probelem comes from flatland.

After I update the version of flatland from 3.0.2 to 3.0.5, this strange phenomenon didn’t happen during many times of testing.

Sorry, I didn’t pay attention to this part.
So, maybe I can’t help with your debug process.

No worries, we’ll look into this issue asap. Thanks for pointing it out!