Here is a excerpt of the summary of my week 4 performance. It looks like a single 150k$ claim that I “won” in 25-30% of my markets is explaining the poor performance for this week. At least that’s what I presume since there’s a very big gap between losing and profitable markets. Interested to know if anybody else saw womething similar this week? 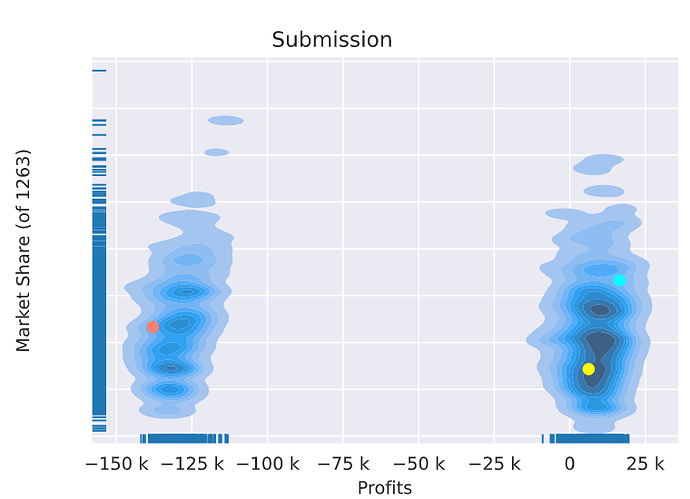 Similar shape for me.

Confirm I too saw a small group of exposure with a 150k+ average loss that went with it. I agree that a single large claim in the market would explain things… including the significant shift in positions some high ranking week 3 people saw.

Shame no-one is able to offer any Excess-of-Loss cover. A single large claim like this in the final round could make the final outcome a bit of a lottery!

Chipping in on this one, we are looking into potentially offering market-wide excess-of-loss reinsurance this week to reduce this effect.

it would seem both extremes are too greedy.

For argument sake, let’s say the portfolio consist of 10 policies with exactly same risk profile and exposure, and a probability of claim of 10%. The policies are are numbered sequentially. And there are 10 companies in the market. There is nothing to stop competitor i (i = 1 to 9) from deliberately undercut any policy number ending with i; and in a particular year, the policy number ending with 0, which I win, have a claim. The portfolio’s expected claim and the expect claim on every policy are predicted perfectly. Just that you won’t know which will be the policy claiming each year.

Given that competitor’s action cannot be controlled, I don’t think there is a need to deliberately eliminate the lottery effect by introducing excess of loss cover. If we must introduce excess of loss cover, it must price in a real life manner (i.e. the price of the cover needs to be higher than the expect claims on the cover). Just like going to the casino, buying insurance against the dealer must always be a net cost.

Just to update this thread, we have now introduced market-wide excess-of-loss reinsurance, or to put it more simply, claims above a certain threshold are now capped.

To see the reasoning and some more updates see this announcement.

The short version is, yes this is part of insurance markets in general and big claims happen, but big claims that wipe a company out completely don’t happen to many companies in 1 year because of mechanisms in place such as reinsurance (and yes, I realise I am saying this in a COVID year)