It's (almost) over! sharing approaches

Hmm ok we’ll look into this and see the scale of the issue. If many people had this issue then we will definitely take action, and if any model fails because of this we’ll get in touch

Well, as we saw from the weekly profit leaderboards, a more accurate model might not be that helpful anyways

. Since year 5 is completely new data, I also wondered if the prior year features would correctly extrapolate/generalize. I guess I probably wouldn’t change my submission at this point regardless. Looking forward to seeing the results!

It’s a shame the confusion. In my case, from the first moment I understood that the predictions with access to past information were only for the RMSE classification. In my opinion it is very clear in the instructions that the final leaderboard is only with information from year 5 and that it should be a model that works policy by policy, without past information.

In fact, I did a similar approach for other participants by saving some of the past information in my model. It would seem so unfair to me that the participants who have been confused do not participate after the work carried out as if they had advantages over those who have understood the methodology of the final classification.

I would propose that confused participants be allowed to adapt their model to receive only information from year 5. But they should not be able to change the price, or create new variables… Just make the minimum changes to be able to participate without any additional benefits.

Finally, I want to add that this is the best competition I have ever participated in. Congratulations to the organizers for the great work.

I decided to sell “so expensive” because whenever I lowered the price my profit was negative. That made me feel sad because I think our solutions (markets) are not social optimum.

Probably my quantitative models are too conservative so there not much difference (compared to other modeling methods) between people who made at least a claim and other people.

Yes, I was expecting the same format.

I see what lolatu2 is trying to say, but I don’t buy the arguement that inclduding year1-4 rows is advantageous to michael, myself or others in our position - even if there is only year 5 data, prior year information can still be passed into your model, you just chose not to. I could have created a dataframe which contained all prior year features as part of my “model”, I just chose not to handle all prior year features this way because that would have meant refactoring my code (and it hadn’t even occured to me that this might be necessary, since the competition so far always gave access to prior years for all leaderboards).

I tried my best to have a fool proof model so that it doesn’t crash. So I doubt it will crash…

Ultimately, the fix I would need is just to retrain the model without the few features developed on past data, such as the movement of NCD through time.

And I agree with RHG, we should not be able to change the price nor create any new variables.
(Easy to validate as staff has all our codes)

Yes, I was expecting the same format.

I see what lolatu2 is trying to say, but I don’t buy the arguement that inclduding year1-4 rows is advantageous to michael, myself or others in our position - even if there is only year 5 data, prior year information can still be passed into your model, you just chose not to. I could have created a dataframe which contained all prior year features as part of my “model”, I just chose not to handle all prior year features this way because that would have meant refactoring my code (and it hadn’t even occured to me that this might be necessary, since the competition so far always gave access to prior years for all leaderboards).

I think the other intent from the admin’s side with the final test data is to simulate “new” business where we don’t have access to the prior year data.

The final test dataset, where the final evaluation takes place, includes 100K policies for the 5th year (100K rows). To simulate a real insurance company, your training data will contain the history for some of these policies, while others will be entirely new to you.

Hmmm
I really don’t want Ali to be stuck having to verify thousand of lines of code to make sure nobody sneaked some new variables in it after we discussed our approaches in this very forum.

I think the best approach is to let you sink.

Just kidding. Feeding year 1-4 of the training data along with year 5 of the whole dataset and calling it a day seems the fairest approach. Anyone who needed that data could have just saved the whole training set in their zip file submission anyway.

I’ll take my bribe in bitcoin.

Exactly, many people will have already saved this information in their model (through an extra lookup table), so it makes no difference to them, only to those of us who were expecting the information to process those features “on the fly”.

Yea, I think that makes sense. So just run the test set through including the ~240K training data that we got, then filter the predictions on Year 5. That way, there is still the 40% policies that your models wouldn’t get prior year history for, which I think is in line with the original final evaluation intent. I just wouldn’t feed Years 1-4 through for all the policies, since that would actually cause others who understood the evaluation correctly to probably want to change their models. (I’ll take bitcoin too.)

Also, when code fails we won’t be sending your models back to be corrected, we will work with you to debug and fix any issue so that we don’t have to do this manual code inspection in-depth afterwards. Otherwise I will have to plan for a few more years at Imperial

I thought about having two sets of models:

That’s clever. Didn’t think about that. I could have used the prior version of my model for the ~40K without history and my new model including prior claims for the ~60K with history.

Instead, I did bundle the ~40K new one with the no claim bunch. (which is not so bad because for year 1 everybody is assumed to be without a prior claim).

I just wouldn’t feed Years 1-4 through for all the policies, since that would actually cause others who understood the evaluation correctly to probably want to change their models.

I thought about having two sets of models:

That’s exactly what I did. And I thought I had said too much here, about busting the server memory trying to handle all the models

We discussed this offline, might as well add my comments here

I treated town surface area as categorical and created clusters with similar frequences which had enough credibility to be stable across folds and also across an out-of-time sample.

This is the part I’m really wondering about. My understanding is that you calculated a frequency for each city, then “pulled” toward the global average. Cities with less exposure would be pulled more than cities with big exposure. What’s the formula for that?

Oh! I just had another idea. I’ve been looking for a way to incorporate that my loss function is asymetric: I don’t mind overcharging ( I just lose a sale), but I really don’t want to undercharge and be the victim of adverse selection because the only person from that city in my portfolio never made a claim. In other words, I really want to charge you more if you are in a “risky neighbourhood with small exposure” but I dont necessarily want to give you a rebate if you are in a “safe neighbourhood with a small exposure”.

Here is the modeling approach I took. I had tested several models but ended up with QDA and Linear Regeression.

a) Only use data where “claim amount” > 0. This is the most common approach but it overstates the amounts as every new policy will have a “claim amount”.

My goal was to write the polices in middle. Not the cheap ones with no claims or the expensive ones with lots of larger claims. This is my model on training data. X is price and Y is claim amount. 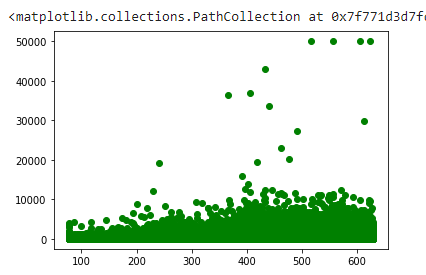 if the overall average was .11 and the city had .2 but only 200 observations but I require 400 observations to fully trust it, I’d set Z as sqrt(200/400) and make the weighted average as Z * .2 + (1 - Z) * .11, then cluster based on the weighted average. I wasn’t very scientific with selecting the requirements to fully trust the number but I did try varying it and checking what values resulted in clusters that improved CV fit.

that makes sense - thanks!

HI we used deep reinforcement learning(MADDPG @openAI 2018) to simulate the market environment and try to get a best strategy in a very unstable market. This is our brief summary. Here we focus on the profit strategy part since we find claim prediction is a high-variance problem(we add gaussian noise~N(0,15) and the RMSE almost does not changed, see 1.3).

the factor(1+profit margin) of all 10 agents in RL model after training obeys distribution~N(1.8,0.26), so i think the 80% profit margin will probably be a Nash equilibrium in this market simulation.

here to test the RL model performance we put the best one(choosed from 10, and we call it king model) in the simulated market and try to use any methods(like changing the profit margin of other competitors) to attack this king model and finally we find this king model can make sure to profit(at least dont loose money) in any environment with a average profit of 1.15 per invoice in hundreds of experiments. But we know the real market/compitetion is much more complex and competitive than our simulated market and most likely our profit depends on the profit strategies of other 9 companies(you cannot expect too much in a very bad market) so we dont expect too much.

1.3 why it is a high variance problem

here we add a gaussian noise with different std to test how random noise affects the result.

so we think the claim prediction problem is a high variance problem as shown in the form. 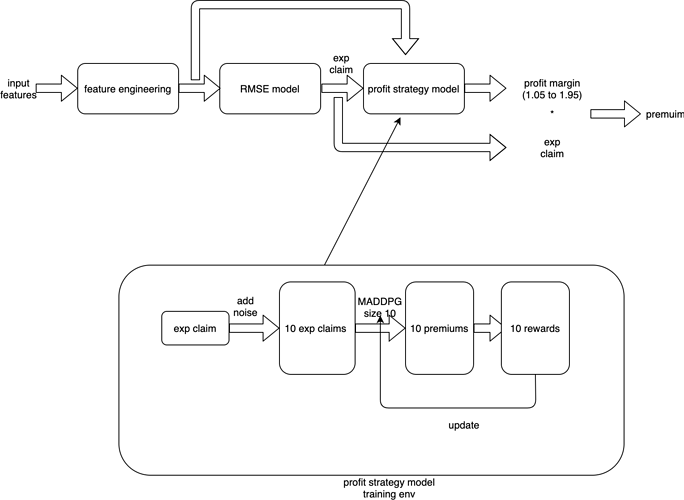 We explore deep reinforcement learning methods for multi-agent domains. We begin by analyzing the difficulty of traditional algorithms in the multi-agent case: Q-learning is challenged by an inherent non-stationarity of the environment, while policy...


here i think the better way is using 10 different models to simulate the market environment as @michael_bordeleau but that would be much more complex so we did not do that. 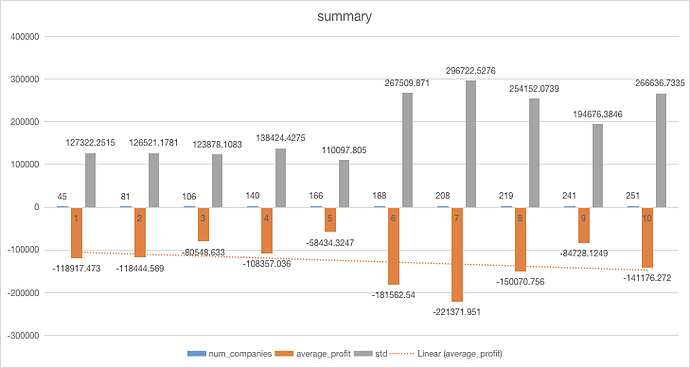 this thread in a picture 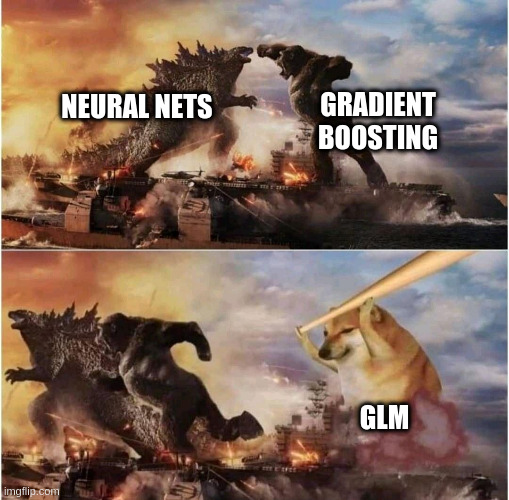