It was very edifying to finish 3rd in this competition alongside some very strong competition.

My approach was to be as data-driven as possible and make extensive use of GBMs. I had a good validation strategy and I was very conservative about allowing small improvements to avoid hill-climbing my internal CV score. I biased my decision-making in favour of dropping features and applying monotonicity constraints where appropriate.

This was my model pipeline:

I coded up a lot of features but was strict about which ones actually were added to the models I built. Other than the raw features we were given, I included the following:

I tested a lot more!

I said in my presentation that vehicle year of manufacture was my strongest variable. In fact, because I one-hot encoded pol_coverage into four variables, one for each level, when you re-combined their importances, pol_coverage was still the most predictive factor, but vehicle year of manufacture was not far behind and I got used to seeing it at the top of the list (and before I coded it, vh_age was top).

I was very surprised by how strong a predictor vehicle year of manufacture was. I don’t understand why vehicles manufactured in year -11 are twice as risky as vehicles manufactured one year before in year -12. I feel this must be some artefact of the way the data was put together - maybe it was extracted from three different sources and combined? I would be very interested to hear from the organisers as to why this factor should be as predictive as it was! 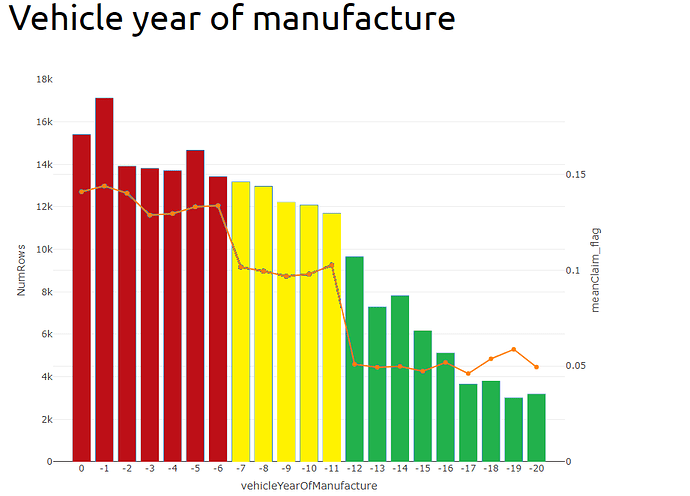 I tried lots of different model structures and feature sets in the hope of getting a sharper final model by ensembing a range of diverse models. In the end, as I only used XGBoost, they tended not to be that diverse, or the ones that were diverse did not add much to the ensemble, of which only three made it.

My final structure is below: 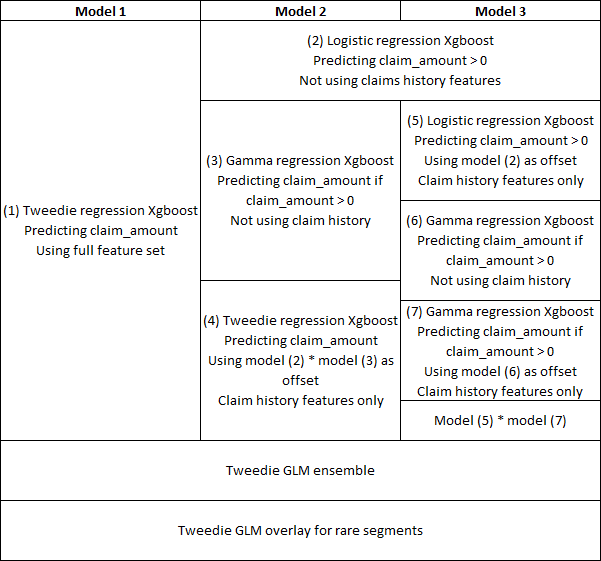 I did not make many underwriting judgements or overlays but I did put in a discount for hybrid vehicles as the model was over-estimating the claims costs for them, I also had a discount where both drivers were female and loads where both were male as well as loads for quarterly payment frequency and pol_usage being “AllTrips”.

In the end I think I was probably very strong pricing policies that were in large homogeneous segments where there was plenty of data for xgboost to work its magic and potentially poor in areas where there were less data and more UW judgement might have been appropriate. I also don’t think I paid enough attention to the pricing element.

I tried to load my prices so that I was comfortably in profit, but also writing policies across the full range of premium values, from small to large.

On the whole it was a very rewarding experience and I enjoyed hearing how differently other people approached the same problem. In the end there were only a few teams that managed to write a significant market share while remaining profitable and I was very pleased to be among them.

Nice, thanks for sharing.
I like your structure a lot.
Using models prediction (with no claim history) as an offset as you did is a clever way to use the same model for everyone, renewal and new businesses.

Thinking about it, I wonder. xgboost has a smart way to deal with NA, for each new branch, the NA can go either way optimizing the cost function. So the NA are used in the model. Knowing that, for your data with no claim info, were the predictions from (2) * (3) identical to predictions from (4)? Or did they differ by a multiplicative constant?

I also checked my residuals for manufacture_year and the difference between -11 and -12 is surprisingly stable. I mean, exposures are still relatively low, so it could be random, but it is intriguing! I wonder if we observe the same for the 40K policies not in training data (probably since your models performed well!)

Talking about these policies, I would have loved to have a different feedback for new businesses and renewals.

This game is addictive, even after it’s over, we have a lot of unanswered questions!

Congrats again, thanks for sharing.

To answer your question, yes they only differed by a very small (I.E. close to 1) multiplicative constant.

Regarding vehicle year of manufacture, the difference between the three groups identified is stark and very consistent when the data is cut randomly or by some other feature. It would not surprise me to learn that the policies with claims were sampled at different rates across the groups for some reason or if there is some other artificial reason behind it, particularly since the boundary points seem so clearly defined.